Hola blog-world! Here are some things we have been up to lately in photos. What have YOU been up to? Do share!

(I apologize in advance that the majority are dog photos...)

As you may know by now, we got a dog! We've named him Chucho and he is an awesome dog so far. Here is some quick history on him and lots of photos:

We have been talking about getting a dog for a while, but just in the new year decided to start actively looking for one from a rescue company. It turns out that the rescue companies are all very hard to get a hold of! I get that they are all run by volunteers and don't have a lot of resources, but we sent (long!) applications to multiple places and didn't get much back from them. It was a bit discouraging! Then, we went in person to the SPCA. Did you know that the one in Surrey doesn't actually have dogs there?! Nor did we! They sent us to the Surrey Animal Resource Centre, where we ended up meeting Mr. Chucho there.

Now, we had thought we wanted a small to medium size dog that shed minimally. We basically figured an Odie look alike would be perfect!

Then, we walked into the dog part of the shelter and there was only one dog up for adoption, "Charming" was his name. There were other dogs there but they were not up for adoption yet; they  were waiting their allotted time after being picked up to hopefully be reunited with their owners.

Charming came right up to the door of his kennel and shoved his whole body as much as he could against it so we could pet him. Then he'd switch sides. This went on for quite some time; he clearly was so lovely and just wanted to be petted!! 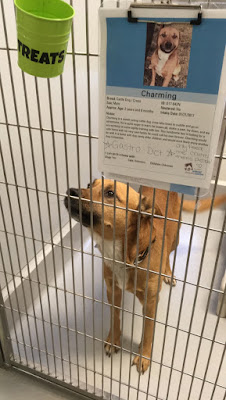 After doing this for a while, we were sold! We took him out to the yard for a bit, played, and the girls told us more about him. We then filled out a form and were approved to adopt "Charming!" (the shelter had named him) He had been picked up in South Surrey about two weeks ago wandering the streets. They think he is about 2 or 3 years old, and is a cattle breed cross with maybe some German shepherd. They scheduled an appointment for him to get neutered the next day, and then we could pick him up the following Wednesday! (which we did, and we also went to visit him on Tuesday night at the shelter)

We renamed him Chucho, which is a Guatemalan/Spanish slang word for dog. He has been insanely good since we brought him home. He is clearly house trained and has not had any accidents inside. He knows how to sit, lay down, shake a paw, and go to his bed. And the best part is that he is just so loving! He always wants to be petted, loves to get his belly rubbed, and gives us kissed on the face all the time. He has gotten along with everyone we met at our house and during our walks, and so far seems fine with other dogs.

It is amazing how easily it is to fall in love with a dog once you meet it in person. This is how we ended up with a 55 pound shedding dog! (definitely not an Odie duplicate) 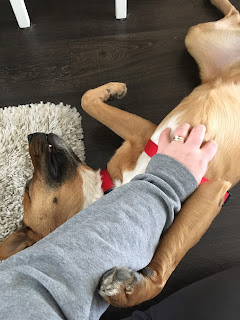 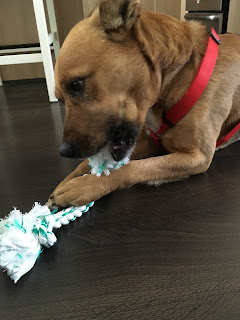 I'm sure you will be seeing many more Chucho pictures in the near future ;) Also, if you are interested in adopting a pet, the shelter has many types of animals: cats, bunnies, guinea pigs, etc. You should check them out!!
Posted by Shannon at 12:50 PM 1 comment: